I love Mew. I do. I’ve loved them for ten years. They were my third musical love, and being a Danish band, it feels right for me to write about them, given this blog’s semi-Danish title. Plus, Mew really are a fountain of hygge – I included them in my Hello Hygge playlist a few months ago. Plus (minus), I love writing about the things I love. 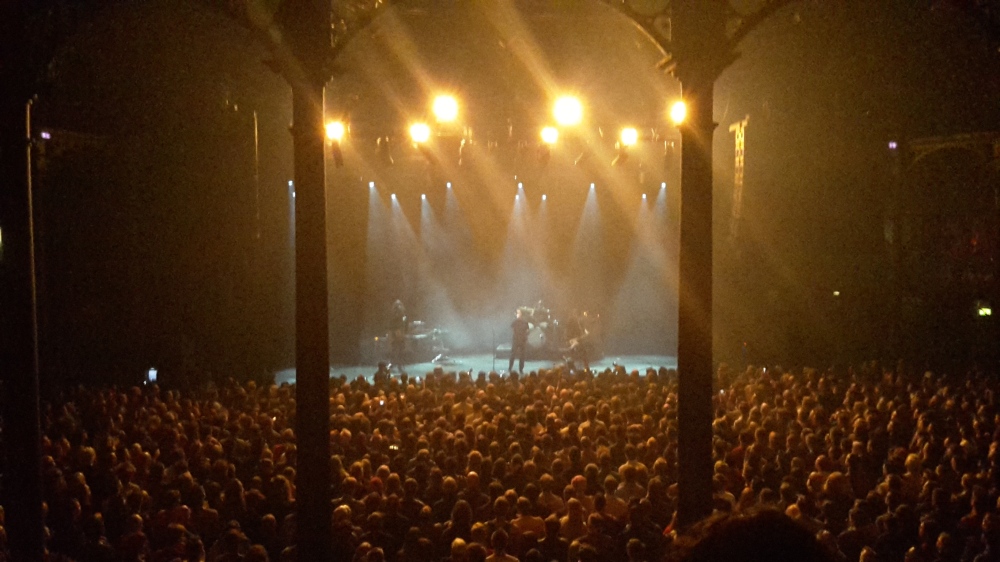 Mew have just released a new album, +- (pronounced Plus Minus – hence my not-so-subtle reference above). It’s good, it’s very good. At first I wasn’t entirely sold, because it’s a lot more poppy and mainstream than I’m used to, but it’s a real grower, and I’m really quite a fan. We got five songs from the new album at the Roundhouse, as well as all the crowd pleasers from Frengers, And The Glass Handed Kites and No More Stories.

We kicked off with Witness and Satellites, which according to Setlist.fm, seems to be pretty standard for this tour so far. These were also the openers when I saw them at The Great Escape 2015 in Brighton on Saturday (is it mental to see the same band twice in five days? I don’t care). At first I wondered if the crowd might not be so familiar with these newer tracks yet. From my lofty position on the balcony, I couldn’t really see anyone moving. Or doing anything, really. Not even awkward British shuffle-dancing. OK, a shame, but understandable.

Next up were a couple of very well-known tracks – Special and The Zookeeper’s Boy. Again, tracks from Saturday’s show, but no complaints here. Actually, I’d never been especially excited by Special before hearing it live, but since hearing frontman Jonas Bjerre belt out ‘I saw the worst of you’ twice in one week (and I swear he kicked it up a notch at the London show) I can’t get enough. But then, when he held out the microphone for the iconic ‘Are you my lady, are you, my lady are you, are you?’ line from The Zookeeper’s Boy, it sounded like there was hardly anything. Come on! Why are you at a Mew show if you’re not going to snap your vocal cords in The Zookeeper’s Boy?!

Track after track, they were loud and relentless and the band killed it. Last night’s gig reminded why it’s important to appreciate a great drummer, and christ, Silas Jørgensen is a GREAT drummer. It was like when you see Sigur Rós play, and in Untitled 8 they put the spotlight on the drummer for that incredible noisy drum solo, except Silas never really got the spotlight because he was insane all the way through (and yeah that’s a good thing).

There were some unusual song choices (I thought) in the middle – I definitely wasn’t expecting Silas the Magic Car (as much as I love it, it’s not really a showstopper in a live show) or Hawaii. But anything off-piste was more than made up for with the knockout performances of Am I Wry? No (my favourite Mew song) and 156 (my second favourite Mew song), one after the other. It’s so exhilarating to hear songs you’ve loved for a decade played live, especially a song as euphoric and soaring as Am I Wry? No. I also couldn’t get enough of the unusually dark, sinister 156 – ‘Don’t you just love goodbyes?’ is my favourite lyric in any song ever, and the juxtaposition of Jonas’ angelic vocals and the crunchy guitar was perfection.

This was Mew at their noisy, frantic best. But, if this is possible, it was a sort of controlled chaos. It’s effortless for Mew. It’s just a shame the audience didn’t put a bit more effort in. I don’t know why it felt so subdued. The band seemed happy enough, but the atmosphere was a bit off, and not quite at the same level as the Great Escape gig. True, I hadn’t fought tooth and limb to get myself planted right at the front at the Roundhouse, but it just didn’t feel quite the same; maybe because it was a bigger venue? I don’t know. It beats me how anyone can watch Mew live and not feel it.

So just why does Mew so accurately represent hygge? Because their music is warm and luscious, even when it’s a little bit spooky and loud as hell. You always feel like you’re in a safe pair of hands, and part of something reassuring. What they’re really good at is creating comforting sounds. And on that note, I’ll leave you with their epic closing track…

You can buy +- here, or catch Mew on tour at one of their upcoming shows.