Living in a seaside town has lots of benefits; especially one as well positioned as Brighton. We get a beach to play on in summer (pebbles and all), a refreshing coastal breeze, the drama of violent storms over the sea and a constant flurry of new people to look at. But I think that Brighton really comes alive in autumn. When my brother and I were children, we used to spend a lot of time at Preston Park, and it’s still one of my favourite places to go at this time of year. Dan and I went on a quest to find some conkers this morning – apparently spiders don’t like the smell, so leaving them on the windowsill can be a good deterrent to keep our eight-legged friends at bay.

We found some blackberries in the hedgerow. It gave me flashbacks to the summer, when I made jam for the first time ever. I hope the relatively mild autumn we’re having so far is going to mean we’ll have berries out for another few weeks yet. 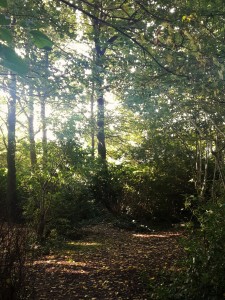 I love the hidden clearings in Preston Park. We met a squirrel here. I love squirrels. There was a sign requesting that people don’t feed the squirrels as it attracts rats. I don’t love rats quite so much. Not wild ones anyway.

I’ve been noticing lots of unusual flowers around Brighton recently. Some of them look like anemones; some of them like alien lifeforms. These are pretty normal though. Pretty and normal. I love the orange. 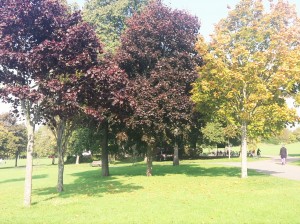 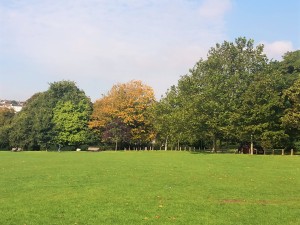 It’s taking a long time for the trees to turn this year. When I was little, it was always September. We’d crunch our way back to school in new uniforms and the chunkiest school shoes I was allowed on a carpet of auburn and gold. It’s not really like that yet. But it’s starting to happen now. 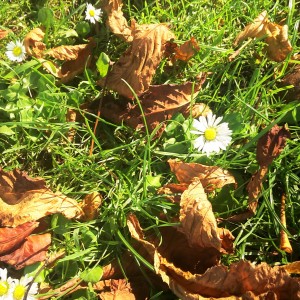 I thought this was cool. Daisies still peeking out from the first few fallen leaves. Is it April or October? Who knows, who cares. The seasons are changing.

We found conkers, by the way. Not many, but the trees are abundant.

What’s your favourite spot for an autumn walk?