Shorthand is terrifying, at first. Even once you’ve mastered the alphabet, and the commonly used words, the second you’re given a passage to write in shorthand, it’s heart-stoppingly freaky. ‘I… will… be- WAIT SLOW DOWN OH GOD WHAT IS THIS TORRENT OF LANGUAGE COMING MY WAY OH MAY THE LORD SAVE MY SOUL!’

Teeline letters are based on the letters of the alphabet. The Teeline A, for example, uses the top of the A, above the bar. Teeline W uses a smooth curve, eliminating the central peak.

The above image shows the Teeline alphabet. It shows obvious similarities to the standard alphabet, for the most part. The top line is A-M, and the bottom line is N-Z. Aside from being letters alone, most of these also stand for commonly used words. For example, Q stands for ‘question’ and ‘equal’, and R stands for ‘are’. X is apparently one of the most memorable of all the Teeline words – accident, if you’re wondering. There are also vowel indicators. When vowels are used in words, indicators tend to be used, rather than the ‘whole vowels’ seen in the alphabet above. The vowel indicators, in order, look like this:

We’ve been learning to create words by combining the letters. At first it feels so wrong trying to force these alien squiggles into anything resembling ‘words’ (or ‘outlines’, as they are known), but after a few goes it feels a bit more instinctive as to where you’ll be taking the word. Mostly, you cut vowels out of words, unless the word starts with a vowel or ends with a prominent vowel sound. For example, in the word ‘care’, both vowels would be omitted, as the final vowel is not heard. In ‘era’, however, both vowels would be kept. With double vowels, only the dominant vowel is included if necessary (in ‘idea’, the A remains). Silent letters are omitted, and only one of a double consonant is used. Occasionally, words take phonetic spellings for ease.

Here are some examples of the letters used in some simple Teeline words:

Some words take ‘special outlines’. These are mostly for commonly used words which are too long to write quickly. For example, ‘difficult’ is reduced to ‘dfc’, and ‘immediately’ becomes ‘imdi’. Word groupings are used to write sets of commonly used words quickly. Instead of writing each word in ‘I will be able to’ individually, they can be put together in one outline.

Word groupings are used to help us speed up the writing process, so that it’s not a long, laborious process writing out little function words. This is as far as we’ve got so far, but it feels like we’ve learnt quite a lot since last Monday, when we started the course. The aim in shorthand is to reach 60 words per minute to pass the course, and 100wpm to reach the ‘gold standard’. 100wpm feels impossible at the moment, but hopefully as we gain confidence it’ll feel a bit more achievable in a few weeks. I sent this to a friend on Twitter earlier: 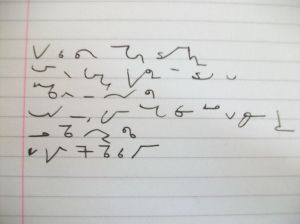 Hasn’t this been a lovely introduction to Teeline? Please let me know what you think, and I’d also appreciate tips from anyone who’s already learnt Teeline! Tips from left handed people who have learnt would be great too, as I’m having trouble writing on the top few lines of my spiral-bound notebook. Any recommendations for good pens would be great too (not gel pens – again, the left handed affliction makes them a bit problematic in terms of smudging.)