Just a quick one really to fill you in on my hospital appointment as lots of people have asked me how it went. It was a super early appointment and I was the only young patient there so I think everyone felt a bit sorry for me. We all had to be weighed and we had our height taken before we went in. The old lady before me said to her daughter ‘Hold my bag dear, all my money might weigh me down’.

I went to see a nurse first who took all of my medical history and did some basic tests (I couldn’t even see that there were letters projected onto the wall, let alone what any of them were, and I couldn’t see that she had fingers, let alone how many she was holding up) so I think she realised pretty quickly that my vision isn’t great. We did my blood sugar (sky high – always is the moment I get stressed) and blood pressure (normal) and then, out of nowhere, I had a panic attack. Of course I did. There is always a drama wherever I go. I found the whole thing quite overwhelming. But I got over that and she told me I have to go under general anaesthetic rather than the local I was expecting for the operation and I’m not very happy about it but apparently young eyes don’t respond well to the anaesthetising eye drops so it wouldn’t work.

She told me I’d be fast-tracked through the system because of my age, the severity of the impairment and the nature of the work I do (writing), and I was sent in to see the opthalmologist who took some measurements. Unfortunately the cataract in the left eye is so dense that she couldn’t take measurements with normal equipment so she wheeled in a different machine which kept beeping ominously. The measurements from both eyes will be used to craft my new lenses. I feel like I’m going to have robot eyes.

I then went to see the surgeon who will be performing the operation who informed me that with my highly dilated pupil, he could see some clear clouding on the lens. I couldn’t see it in the mirror so I took a picture to quash y curiosity. Here it is: 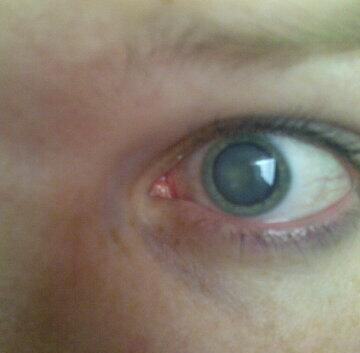 It’s not entirely unlike looking into a Harry Potter-esque Pensieve. All swirly and murky and creepy. But anyway, the surgeon agreed that it was urgent that I got this sorted and insisted that my operation date went ahead as soon as possible.

Because I’m going under GA for the first time, the anaesthetist came to see me. I’m an awkward case because I’m diabetic (I know, really? I’d never mentioned it before) so I’m off for another blood test tomorrow. As I tweeted, #literalbloodyhell. Christ knows what they want this time.

So in the next few weeks I have a blood test, an unrelated medical appointment, an appointment with the diabetic nurses and my operation on 14th August. Less than three weeks to go until I can see again! I feel like my right eye is working extra hard to compensate. Well done, right eye. I’m glad the operation is so soon because, as I said, I am much more of an impatient than a patient, especially where my eye is concerned. All I can say is that it’s lucky I’m a proficient touch typer or I would be unable to work.

Despite everything I’m feeling fine though. All other aspects of my life are going very well, and once this is sorted (and the other eye which will be done before Christmas apparently) I will hopefully not have too much to worry about for a while. Although I did ask my mum to place a bet on which part of my body would pack up next. I went for the kidneys. She told me I was a horrible girl and to stop asking her. There is always one spoilsport.