Domestic goddesses aren’t just born; they are the sum of their actions (except for Nigella Lawson, obviously). It was, in part, for this reason that I decided to make jam for the first time ever tonight. And I don’t do things by halves, so I went all out and used berries I had picked myself. Handpicked, homemade jam? ULTIMATE HYGGE.

Let’s rewind for a sec. In a fit of wanting to revisit my childhood, we went fruit picking at Roundstone Pick-Your-Own farm, the place we used to go when we were kids in the mid-90s, at the weekend. Despite the heat (oh, the heat!), I had an absolute ball. My ankles were lacerated from scrambling through thorny bushes, and it was hot, bendy work, but it was so worth it.The strawberries were disappointingly well picked over, and the French beans were still very small, but otherwise, my little basket was laden with blackberries, raspberries, blackcurrants and redcurrants, with a whole extra bag of plums.

So what do you do when you get fruit-pickin’ happy? When life gives you too many berries, make jam. That’s the phrase isn’t it? So make jam, I did. And it turned out ruddy bloody well, considering I’m a total beginner.

I don’t have all the jam-making kit (in fact, I had to run out at lunchtime today to buy jars – two for £1 in Tiger!), so I needed to find a recipe which doesn’t use pectin. As I understand it, pectin helps the jam set – but as I discovered, it isn’t really necessary. I have the added complication of being diabetic, so I also didn’t want to go crazy with the added sugar. I struck gold with this recipe, which follows a traditional pectin-free method, a satisfyingly minimalistic ingredient list (just your fruit of choice and sugar), and a reduced-sugar option for the pancreatically challenged like me (or just plain health conscious). You’ll also want some decent saucepans – this related site will help you choose a good one to minimise the pain of scrubbing set sugar off your trusty old pans.

The jam I made is mostly blackberries (about a US cup and a half – and if you don’t already have US measuring cups, I highly recommend them, because they make American recipes about a million times easier to follow) with about half a cup of raspberries thrown in. This wasn’t intentional – I just didn’t have enough of any single fruit. To this, I added about two-thirds of a cup of sugar. I was meant to use granulated, but I only had caster, and it didn’t seem to cause any problems. You can also buy jam sugar, but that’s too much effort for a lazy, entitled millennial. 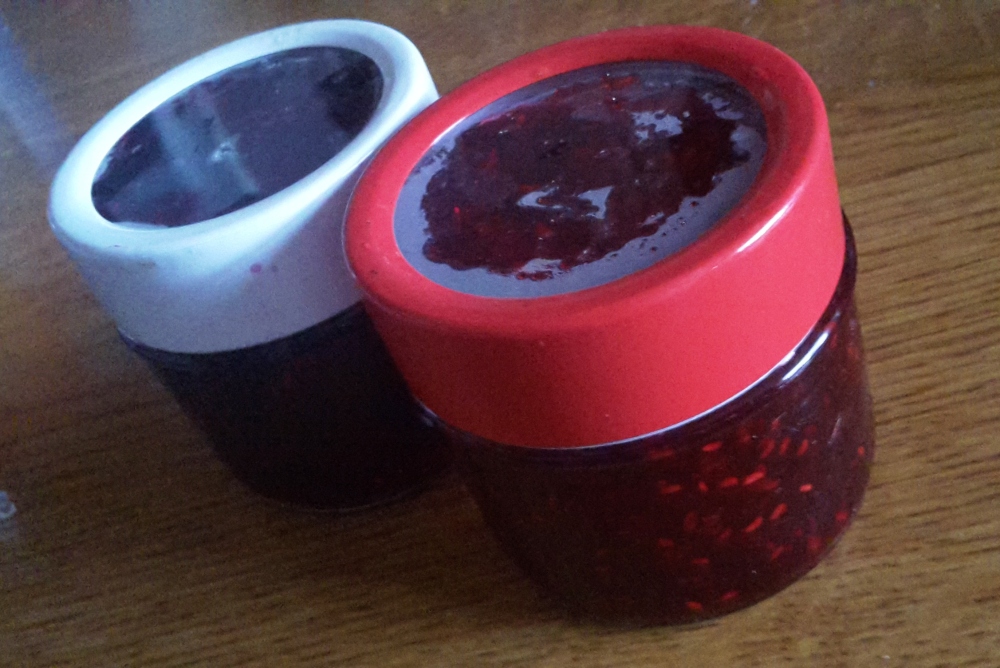 The recipe I mentioned served me really well, even when I played with all the measurements. I only had the two mini jam jars I bought today for this experiment, but I got really lucky and the jam I made was the PERFECT amount to fill these two little jars. For the next batch, I’ll buy some Pinterest-friendly gingham-lidded jars, and probably some nice little labels, but as a test run, I’m ecstatic with how this went. To kick up the hygge-factor to jam-azing, you could probably try a bit of vanilla sugar in place of the regular, or add a sprinkle of cinnamon (a staple of the hygge kitchen cupboard) to a stone fruit jam (I’m thinking plum here), or maybe even a dash of spiced rum. Does that work? Who knows. It’s worth a shot though. Or two shots. Consume your boozy jam responsibly etc.

I’m now on the lookout for more creative jam recipes, so if you have any, please let me know in the comments! I’m also planning on using this jam in a pudding for a dinner party next weekend, so if you have any favourite dessert recipes containing jam I’d love your recommendations.

Now, if you’ll excuse me, I’m off to inject just that little bit of extra hygge into my jam-making extravaganza…